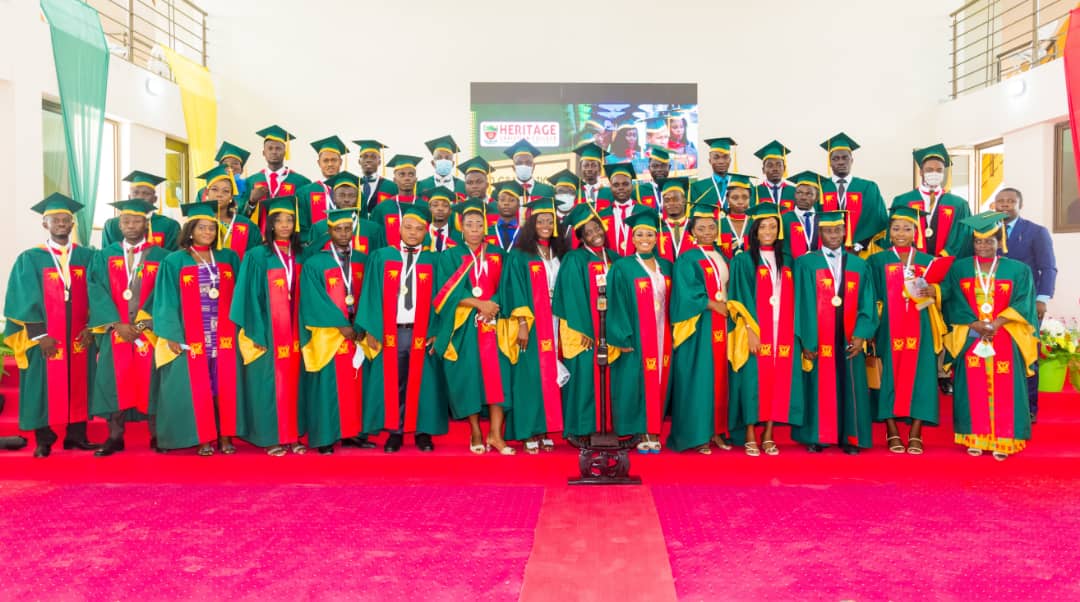 Heritage Christian College, a university in Amasaman-Accra, has held its 2nd Graduation as well as the 20th Commissioning Ceremony of Ministers of the Gospel from the Heritage Bible Institute.

Forty-two (42) graduates were awarded Bachelor’s degrees in Business Administration with options in Accounting, Banking and Finance, Marketing, Human Resource, Business Information Technology Management; Bachelor of Science in Information Technology and Bachelor of Theology. The degrees were awarded by Kwame Nkrumah University of Science and Technology (KNUST) to which HCC is affiliated. The university was accredited by the National Accreditation Board in 2015.  Also, twenty-three (23) graduates who pursued courses in Intermediate Certificate in Christian Ministry at the Heritage Bible Institute were also commissioned.

This 2nd batch of HCC students had two groups of students who placed HCC on the global stage at the Global Social Innovation Challenge in San Diego USA. The first team of Evans Kwarkye, Benjamin Nketiah and Austin Carboo won the Grand Prize and the Audience Choice Award in the 2018 edition of the contest. The second team made up of Casmier Avadu, Anthony Cobbina Pendoxa and Benjamin Appiah Bright that pitched virtually were among the Top 10 Finalists in the 2019 edition of the event.

The President of the University, Dr. Samuel Twumasi-Ankrah spoke about ongoing plans to increase degree offerings of the university in 2021. He mentioned some of the new programmmes being processed for accreditation as Bachelor of Science in Nursing, Bachelor and Diploma in Guidance & Counselling, Bachelor of Arts in Communication Studies, Bachelor of Science in Multimedia Technology, Bachelor of Theology and Community Development, Bachelor of Administration in Accounting and Computing, and Supply Chain and Logistics Management. He said the university also intends to introduce Master’s in Accounting and Finance, Banking and Finance and Human Resource Management.

The President charged the graduates to keep their faith in God, pursue their vision relentlessly and never give excuses. “Go into the world and live what Brian Tracy calls “A No-excuse Life.” Don’t fan the flames of failure in your life. Don’t look for others and things and circumstances to blame for not reaching your

highest potential in life. You all can make it if you live your life by daily inching closer to your goals.”

A former Ambassador to the UK and former Managing Director of Tema Oil Refinery, Mr. Isaac Osei, who was the Guest Speaker, spoke on the theme: “Academia and Industry Collaborations: Closing the Skills Gap of Graduates.” He urged the graduates to live out the values they had learnt from HCC which are very much needed in the development of the country. He encouraged them to be entrepreneurial, apply the practical skills they had acquired to solve problems and make a significant impact wherever they found themselves.

The university, through its Centre for Entrepreneurship, Philanthropy and Ethics awarded students who won the 2020 edition of the HCC Start-Up Challenge which encourages students to present business proposals for sponsorship. Fairview Feed which will produce poultry feed was awarded GHC30,000 while Tils Farms, which will produce tilapia fish, was awarded GHC20,000. Since the university’s start up challenge began in 2018, a grant of GHC230,000 has been awarded to 42 students to start their own businesses, some of which were exhibited at the graduation ceremony. The university believes entrepreneurship is the panacea to the graduate unemployment problem in the country.